This No Bake Candy Corn Cheesecake On A Stick recipe almost didn’t happen. I have got to tell you all about my foodie fail moment that almost became a disaster but ended up turning out pretty cute. It’s tasty too! 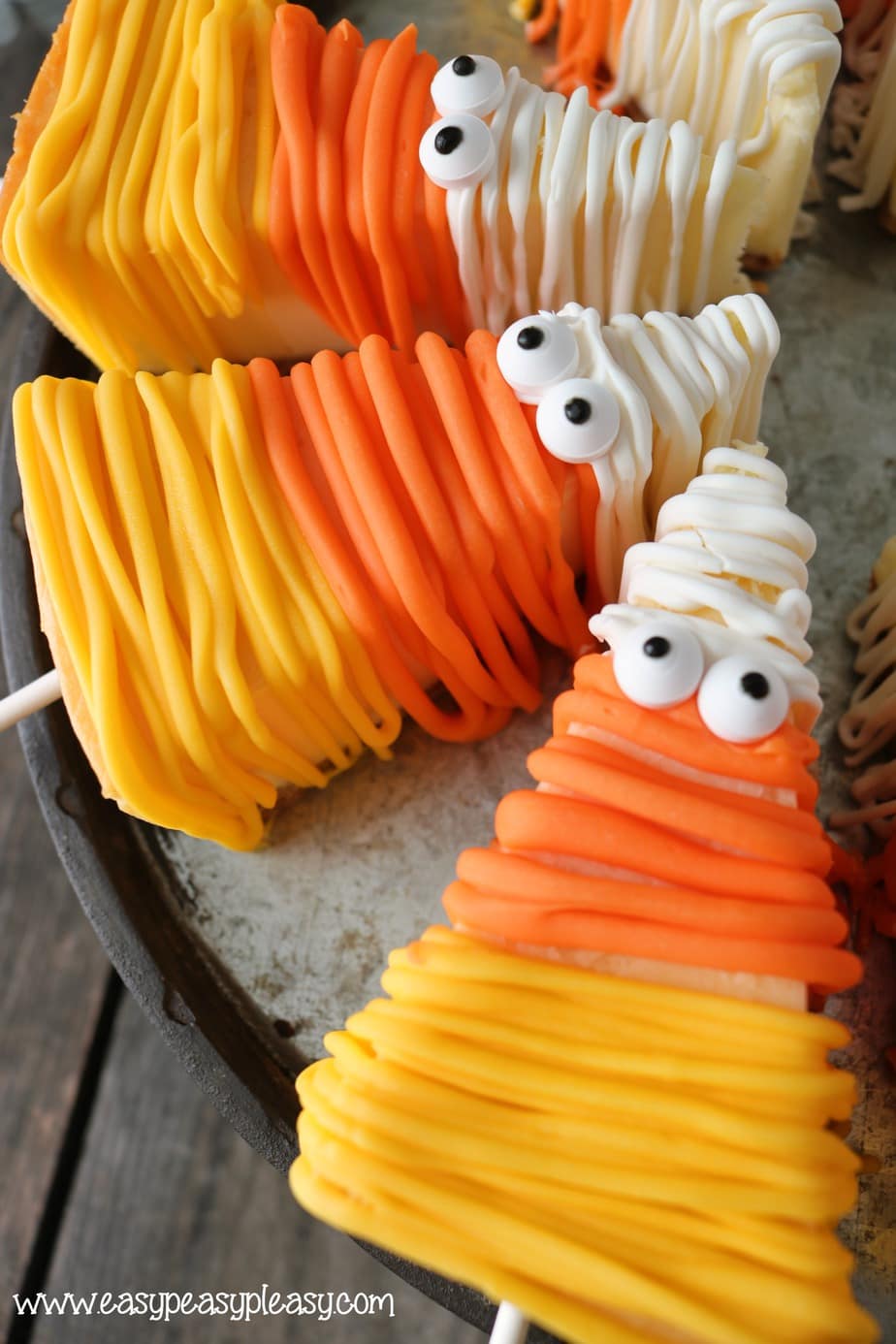 As foodies and recipe creators, we sometimes run into snags. I have learned that just because I have an idea, that happens completely in my head, it doesn’t always translate into a viable recipe idea. Case in point… the start of this recipe.

I pictured a slice of cheesecake and that slice is in the shape of a triangle. My next thought was, how does a triangle work for Halloween? Immediately I think candy corn. Candy Corn is kind of a no brainer for me because my husband loves it and I’ve created candy corn inspired recipes before. Like this Candy Corn Munch. So, now I’m thinking how can I make a slice of cheesecake look like candy corn? Get ready because you are going to laugh!!! 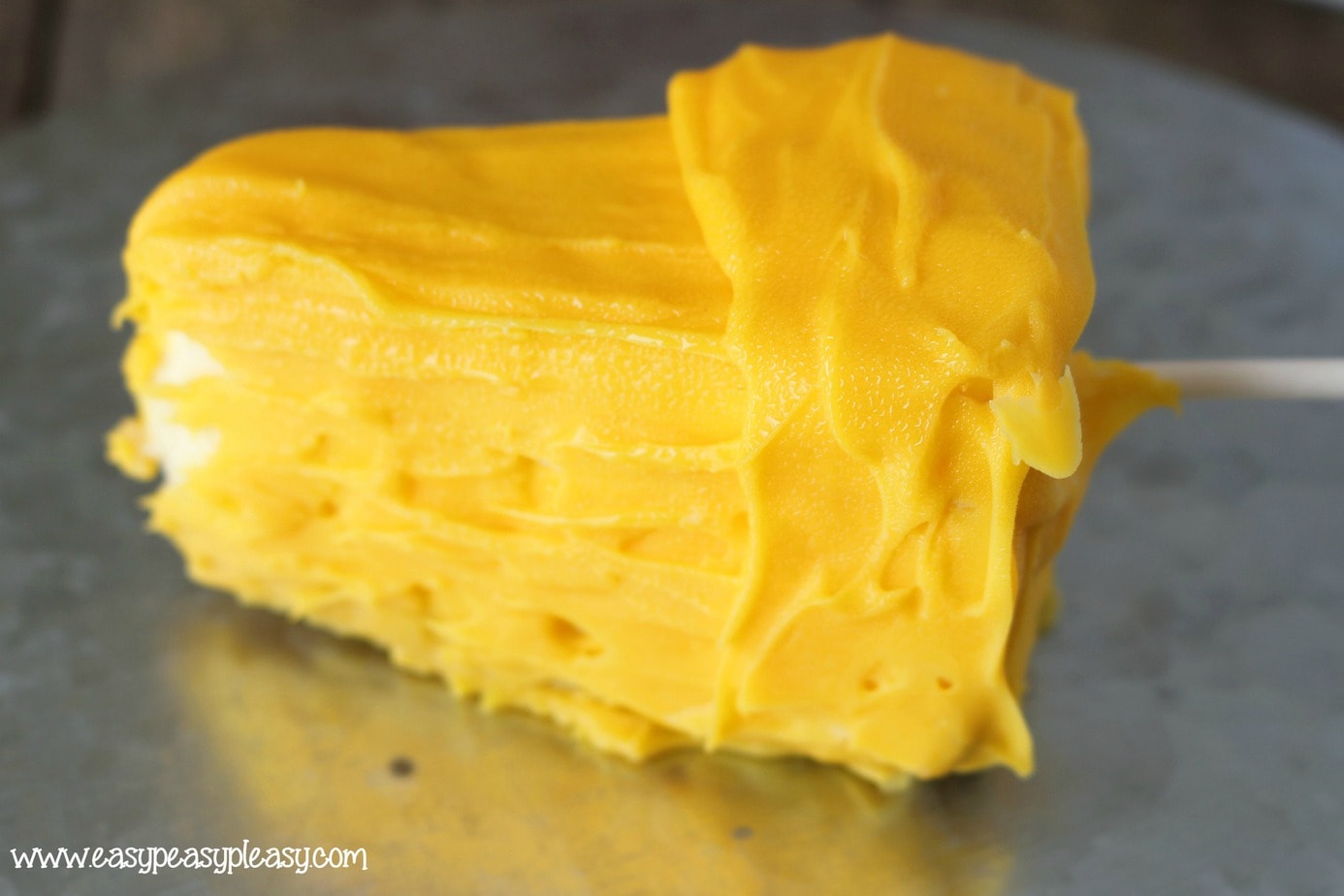 Yep…that was my first and second attempt. I thought I could dip a whole slice of cheesecake into a melted jar of yellow candy melts. Not happening. I didn’t want to waste another slice of cheesecake cause that’s just a crime so I I tried a second attempt. I thought maybe I could spread it with a knife. That’s the big bulge you see on top. Perfectly pretty right?…Not! Totally frustrated I hit up my girl Gina from Desperately Seeking Gina with a couple remedies to get her thoughts. I was desperate…lol!

We came to the same conclusion. DIPPING will not work! The melted candy melts harden way to fast around frozen slices of cheesecakes. If you thaw the cheesecake and try to dip, the cheesecake is to soft and gets deformed when dipping. All around no go. But I came up with a solution! 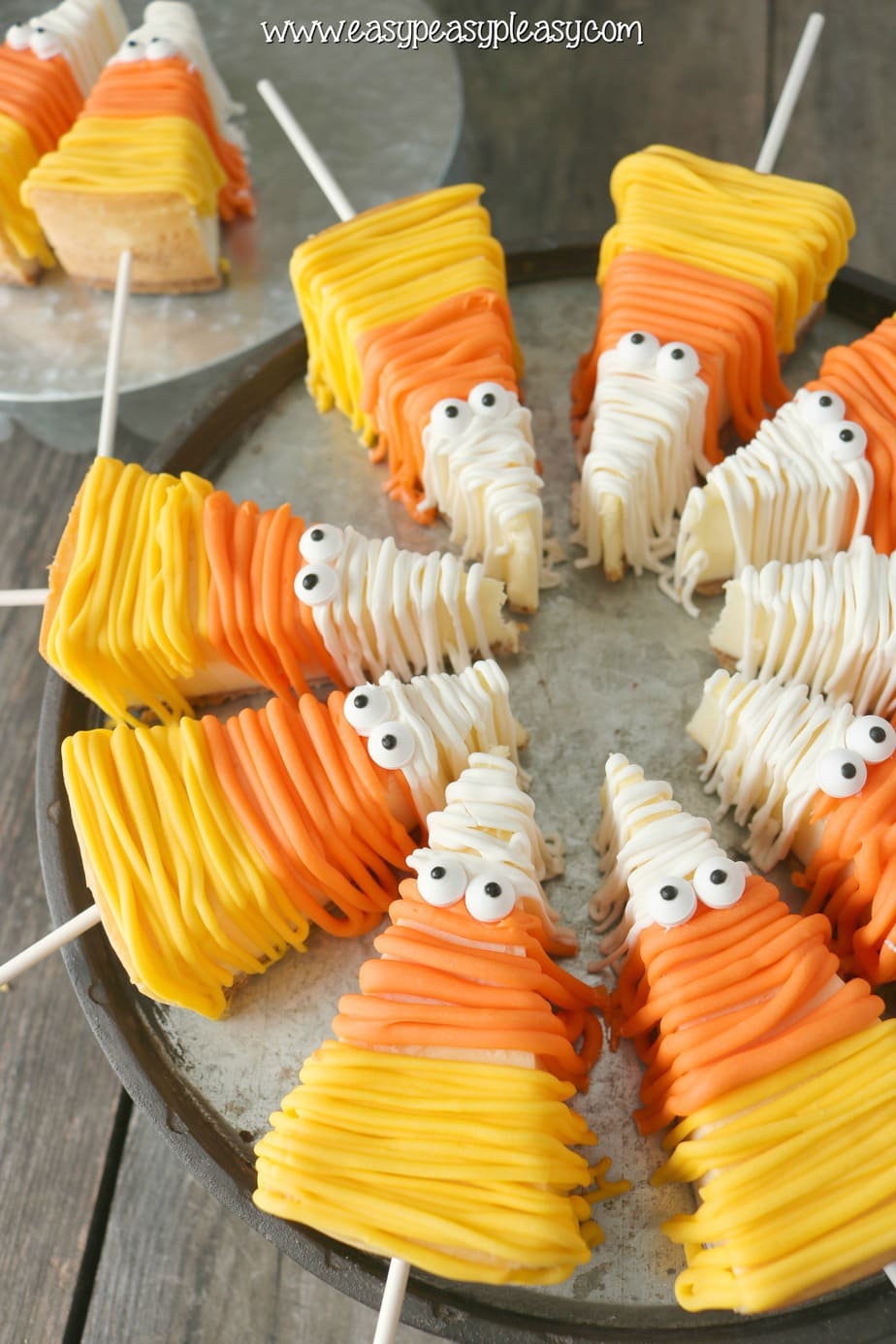 I decided to melt the candy melts, place into a ziptop bag and pipe the colors onto the cheesecake. Therefore saving this No Bake Candy Corn Cheesecake recipe. I added some candy eyes to make them look like mummy candy corn. 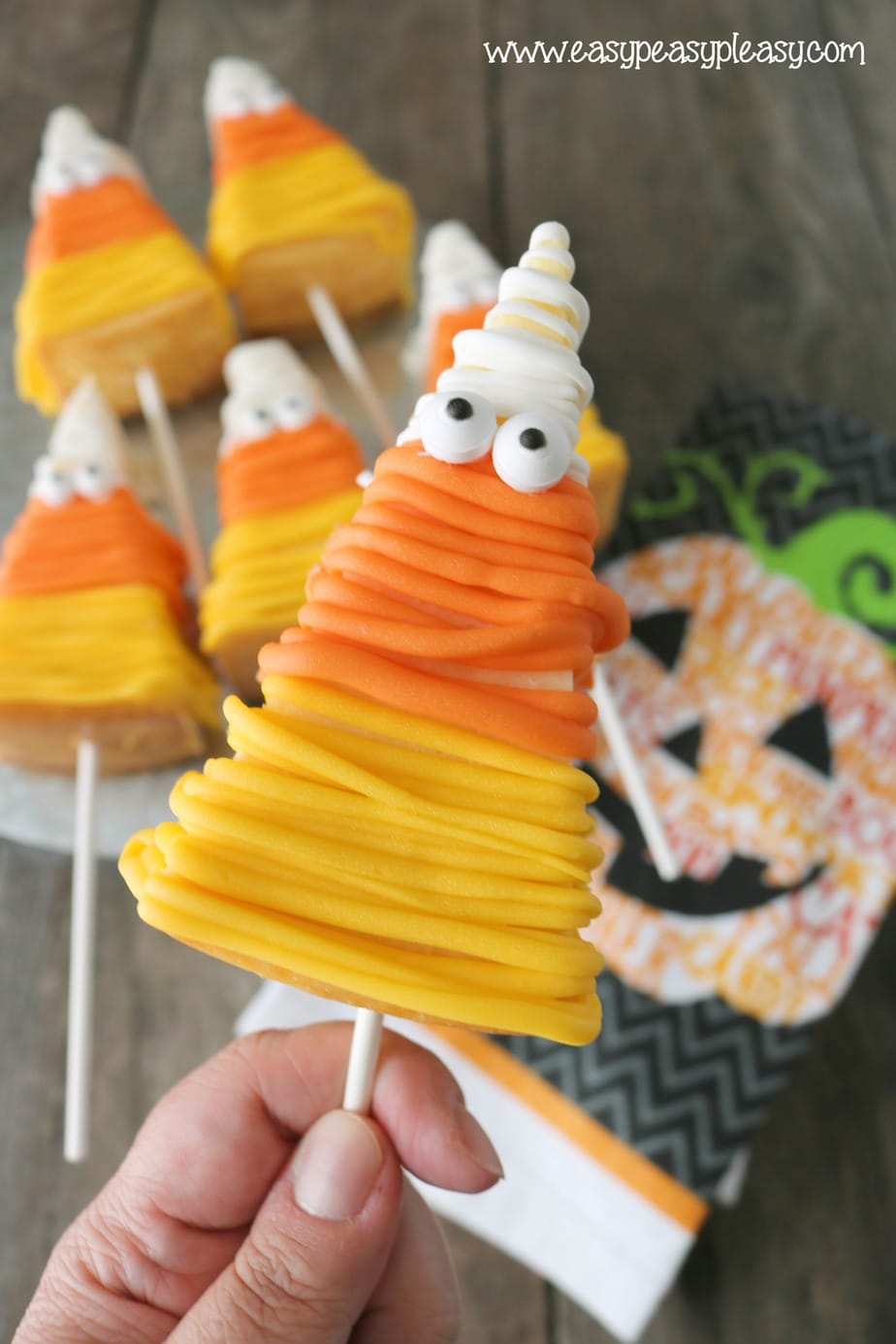 No Bake Candy Corn Cheesecake On A Stick

Thaw your frozen cheesecake in the fridge for about an hour. Once slightly thawed, insert cookie sticks into the large end of a slice. Place back into the freezer. Melt the yellow candy melts in a microwavable bowl according to package directions. Melt the orange and white candy melts the same as the yellow. Place each color in a separate ziptop bag. Roll out a big piece of parchment or wax paper. Place each individual slice of cheesecake on the paper. Start with the yellow and snip off a tiny corner of the ziptop bag. (You can always snip off more if needed.) Pipe the melted yellow candy melts back and forth on the larger part of the cheesecake slice. Complete the yellow on all slices. Repeat the same instructions for the orange and middle of the cheesecake slice. Finally, finish up using the same instructions for the white and tip of the cheesecake slice.

Optional…Add a tiny bit of melted white candy melt to the back of each candy eye and secure to the cheesecake.

Y’all my girlfriend Jeanetta said I almost created my own Pinterest Fail. She was right but I think these No Bake Candy Corn Cheesecake on a stick ended up turning out pretty cute in the end.

Do you have any solutions for dipping a big slice of cheesecake into candy melts?? Have you had any candy melt fails? Let’s talk about it! Leave a comment below.

4 thoughts on “No Bake Candy Corn Cheesecake On A Stick”