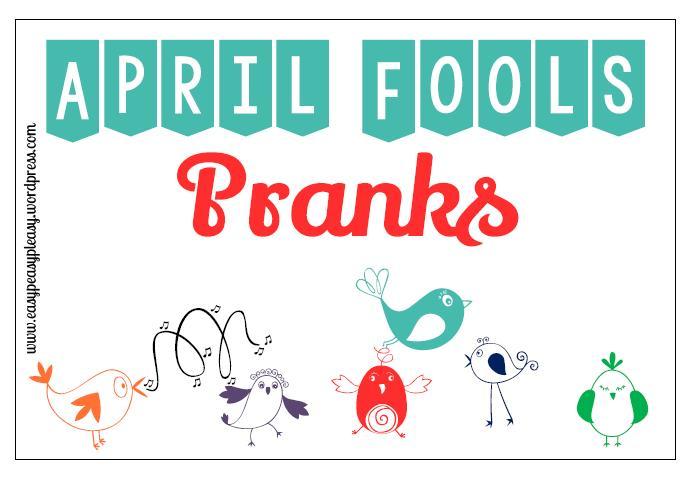 I started my morning out like usual but was patiently waiting to see if my pranks would go off without a hitch. I get the kiddos breakfast ready and tell him to come eat. As Garrett is getting ready to sit down, he tells me he’s not feeling good. Before his butt can hit the seat he takes off running and says he’s gonna throw up. Let me just tell you…I hate the stomach bug! My throat drops into my stomach. I hear the ever dreaded barf sound. I take off after him and when I round the corner to the bathroom, he is laughing hysterically with an empty Gatorade bottle in his hand. Garrett and his dad had planned it all out, down to dumping a bottle of water in the toilet for effect. He had me totally convinced. Yep, Gary the love of my life, I will get you back when you least expect it! Now, with the puking crisis adverted, it’s time to see how MY pranks play out!

I’m just waiting for Garrett to brush his teeth and my first prank. Nothing! I tried the blue food coloring gel on the faucet but that didn’t work out so well. I must have done something wrong. Oh well, onto the next prank. Garrett is finally getting dressed and attempts to put his shoes on. Uh uh uh, not today little mister. I took Walmart bags and stuffed them in the toes of Garrett’s shoes so when he tried to put them on his feet wouldn’t go in. He loved it and went pulling out bags and laughing.

Well it’s off to school for the kiddo but little does he know when he opens his lunch box he will find another April Fools prank. The night before while packing Garrett’s lunch I decide to use a lips cookie cutter to cut out his peanut butter sandwich! 2 kisses from momma around all his buddies! Yes, I’m that kinda momma! I left him a little note… 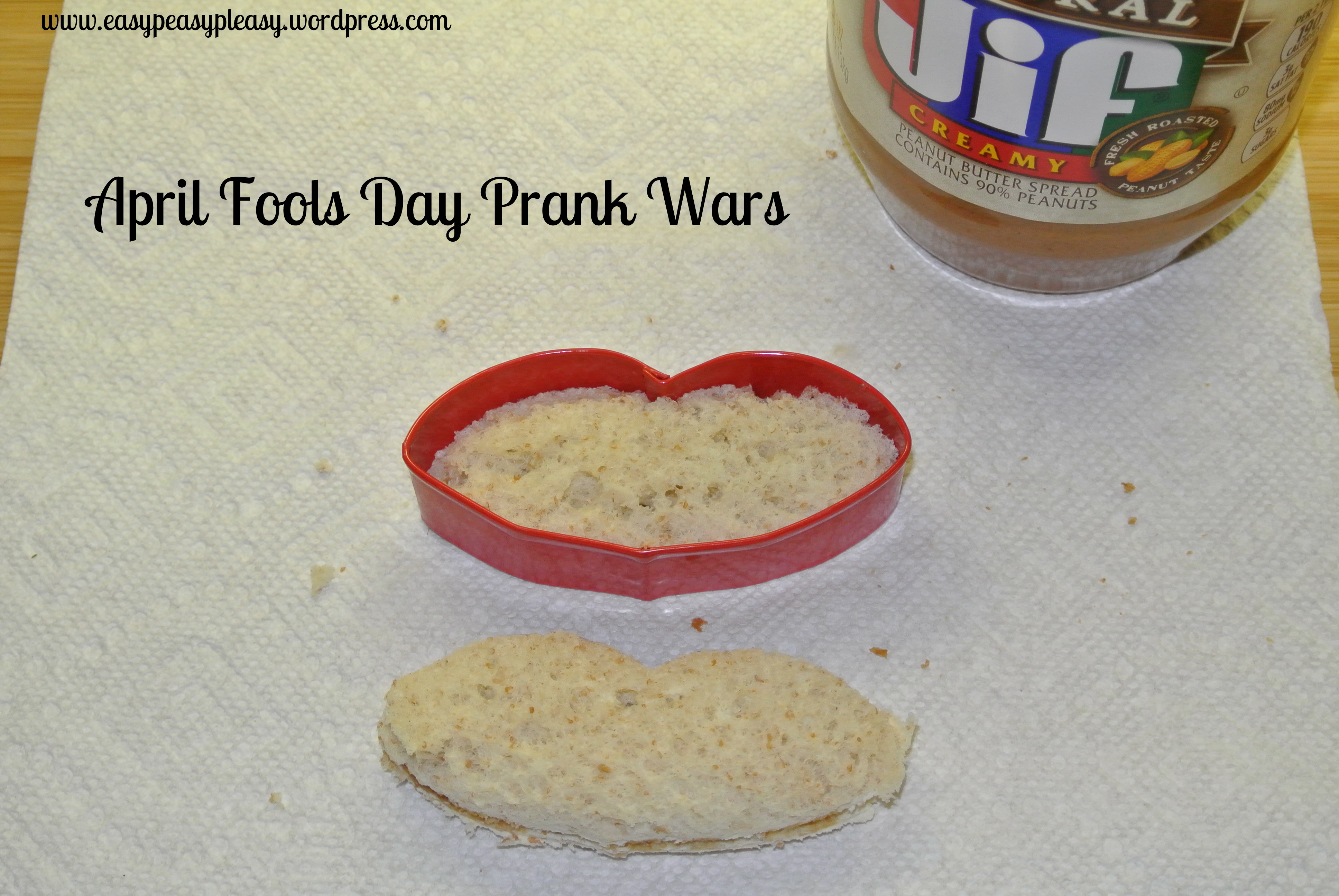 You’ve all seen on the internet where they cut a garbage bag and tape to the kiddos bedroom door full of balloons right? When the child opens the door they are flooded with balloons. Well, I did one better! You know walmart sells little helium tanks…insert menacing laugh here. Those tanks come with a bag of balloons too. Well, the hubby and myself blew up a bunch of helium balloons and filled the floor board and and front seat of my car. I kept them at bay just under the window with a sheet. 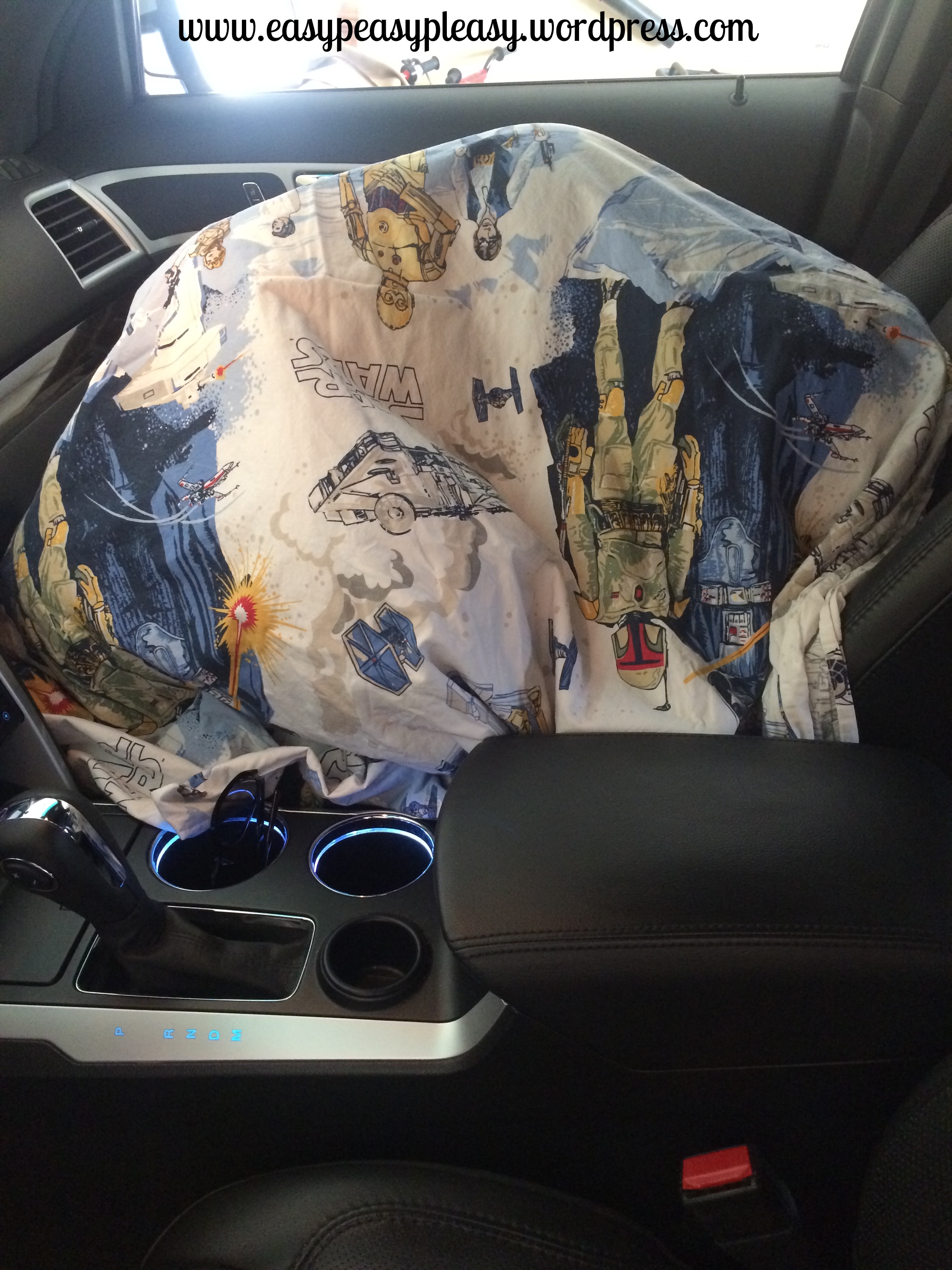 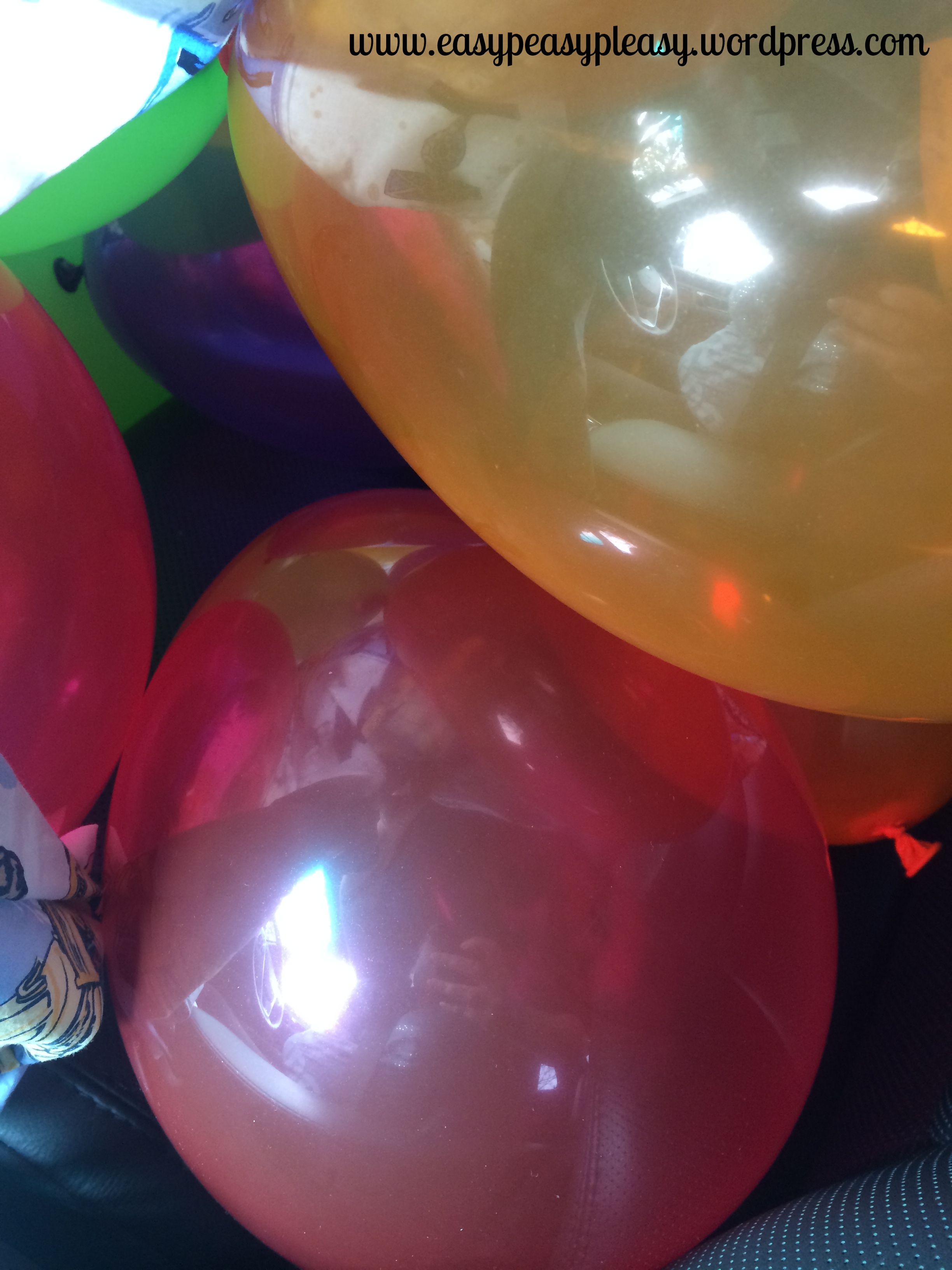 It’s time to pick up Garrett from school. I pull up to Garrett in the pick up line and as he opens the door, I release the sheet. Balloons come flying out everywhere! He has this look on his face like what just happened. I scream April Fools! I think I might have even got the teacher! I wonder now if anyone in the line thought, that poor lady just lost all her balloons! lol! Maybe I April Fooled more than just Garrett with that one! I wish I could have got a pic of the prank in action but I was a bit to busy with the balloons.

The day and pranks were so much fun!…wait just a minute! I head to my bedroom and Garrett is standing in the bathroom. I stop in my tracks. I ask him what he’s doing. He says nothing. I say Garrett what are you up to and he starts grinning from ear to ear. I continue into the bathroom and see that he has wet a wash cloth and wrote his name in giant letters across our huge mirror! You all know how fun it is to clean water from a mirror…streak streak streak! I laughed, then sighed. It’s my own fault. I started this prank war! Eye for an eye! Thank goodness April Fools is only one day!

At this point I’m over it and tell Garrett it’s time to unload the dishes. Mind you when Garrett unloads the dishes he puts up what he can reach (lower cabinets,silverware,etc) then stacks like dishes on the counter. I come in behind him and stow away the rest. So now I’m starting dinner and open the silverware drawer and this is what I find… 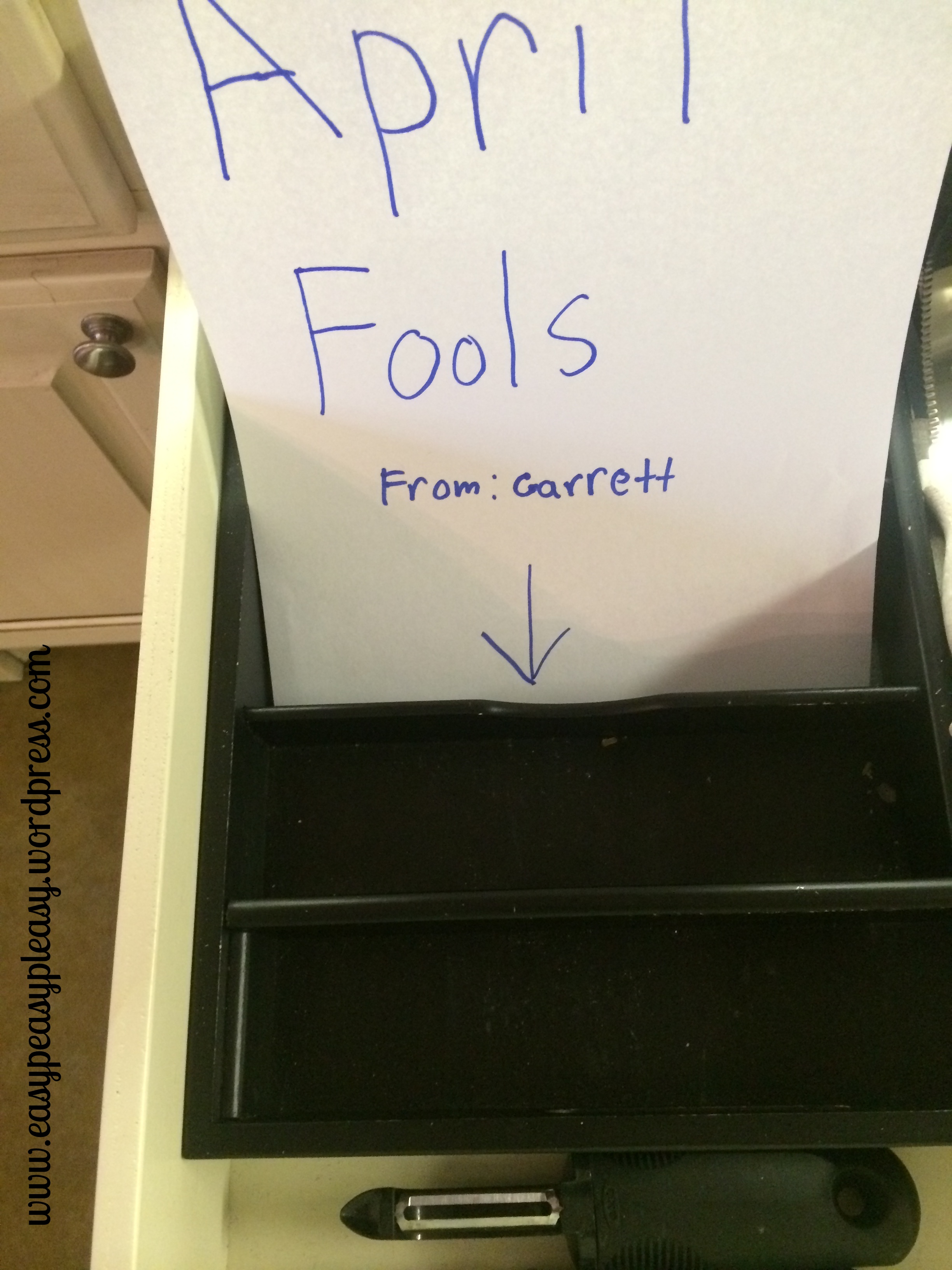 All the silverware is missing! Lol! I snap a couple pics then, “GARRRETT!”

Garrett 3 mom 3! Looks like we ended in a tie! I wonder if Garrett thought he pulled off that last prank since I made him put up all the hidden silverware? hehe

I still have one more April fools prank to share with you….
While Garrett was at school, we decided to April Fools prank one of our good friends. We set poppers up on all the doors in her house! 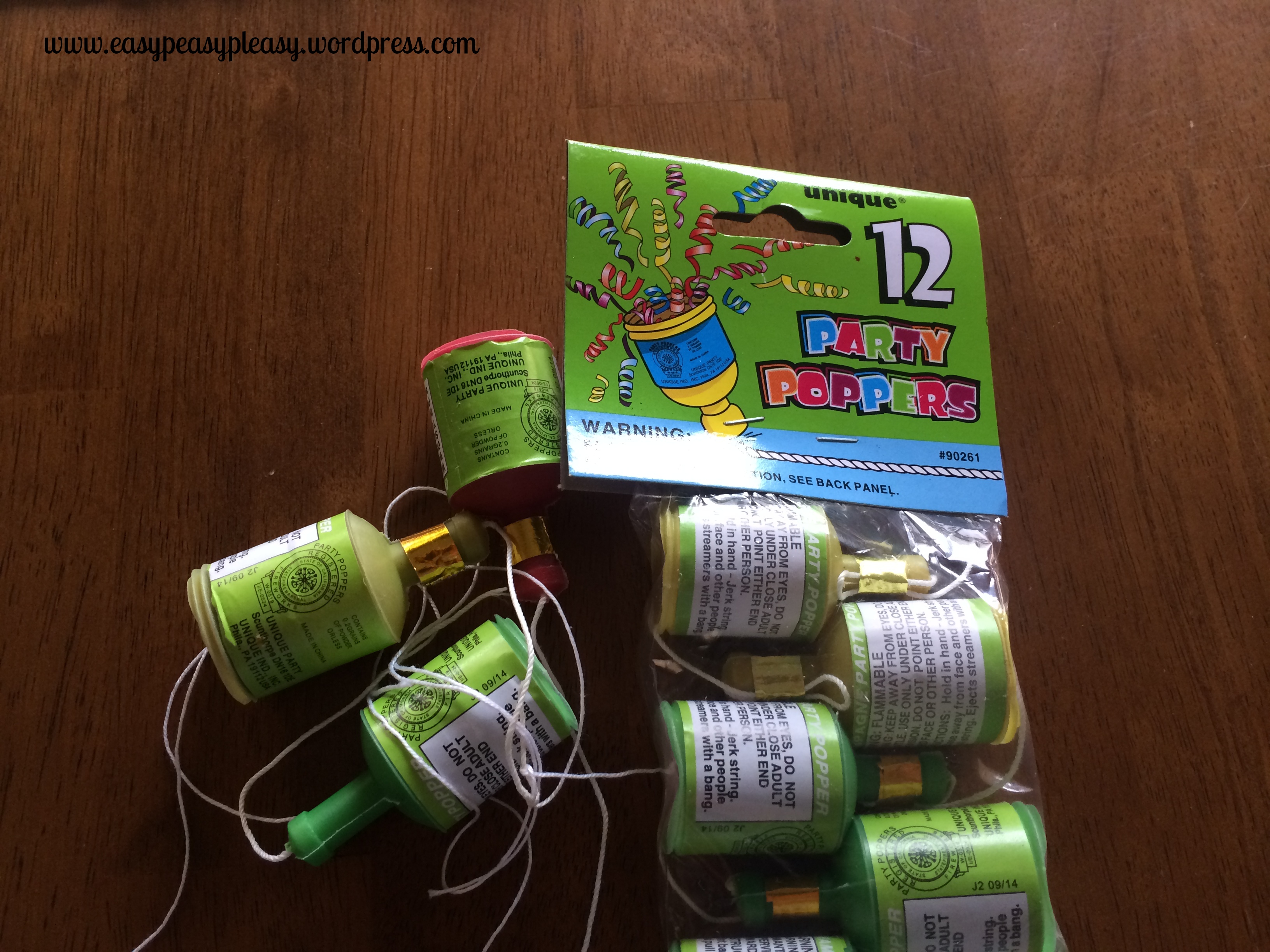 All it took was the poppers (of course), tape, and some string. We tied a longer string to the popper to make it easier to tape to the doors. We had to add the string so we could get out off the rooms. When someone opens the door they make a loud pop sound and shoot out confetti.

All I have to say is, “that’s what you get for letting me have a key to your house!” LOL!

I had a great April Fools Day! How was your’s? Did you pull any pranks or have pranks pulled on you? I would love to hear about your April Fools Day pranks!

Update-4/2/2015-So since my husband has read this post by now, I’m gonna let you in on a little ongoing prank! I put my kiddos underwear in my husband’s underwear drawer every couple weeks! I fall out with laughter every time he goes to put on tiny undies and play it off as an accident!